“I had been a member of about 3 or 4 Christian Dating agencies and websites down the years, as well as running a 20s and 30s group for 6 ½ years, which enabled me to meet over 1000 Christians. I hadn’t had any dating success or met Miss Right, so in late December 2002,  I joined Heavenly Partners . I was sent a few profiles and met about 4 or 6 ladies. People told me not to spend money on dating as it was waste and a luxury. I did give up from time to time and at times became despondent but I kept on going despite the rejections and frustrations in dating. 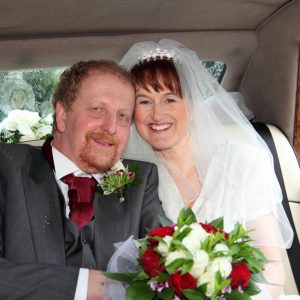 filled with every relationship and blind date I’ve had since 1984 and the figure I got to was 166! I could write a book on my experiences!  No-one could accuse me of not persevering in the one thing I truly wanted in my life. After a break of a couple of years, having not found Miss Right with Heavenly Partners the first time round, I rejoined in 2006, again in 2007 and then again in 2008.  It was in my August profile mailing that I was sent Carolyn’s profile. She’d received mine in July and she rang me up first; then we exchanged some letters. Sadly her mum died which meant our meeting was delayed but we did eventually meet up on Friday 5th December 2008 at Euston station while she was attending a dental conference. The rest is history.

“I had always hoped to get married in my late twenties or early thirties, have three children and work part-time, combining career and family. I had a couple of short-term boyfriends in my early 20s but they were not committed Christians. Once I had passed the age at which my mother got married (33) I thought it wasn’t God’s will and accepted it. Fortunately I had eight nieces and nephews all living nearby and I was able to have a part in their lives and upbringing. However as time went on I began to deeply long for “that special companion” especially once I reached 40. I prayed very much about it and sought help from ministers, my uncle and a family friend. In 2003 I moved out of my parents’ home into a rented flat, but still saw them several times a week. In October 2004 I started looking for a small house to buy, which the Lord led me to, but nevertheless at the same time I felt very lonely. My mother, a faithful Christian lady, took a promise out of her promise box in December which was “Seek first the kingdom of God and His righteousness, and these things shall be added to you”. She hardly ever used the promise box.

I started going occasionally to another nearer church to see if there were any eligible man there. I fell head over heels in love with someone in an important position there, who seemed very shy and not at all interested. I was going through a tough time, had real depression and stopped going to that church when I realised the man was not the right one for me.  My bible readings, and especially the psalms helped me, and I did have to seek medical help too.

Many months later, no nearer to the answer to my prayers, my mother took out another promise for me, this time it was “He is faithful that promised and He will do it”. I clung to these promises despite dismissal by my also faithful Christian father and brother.

In 2007 a friend of my other sister told me about Heavenly Partners and similar organisations. I had little spare time and couldn’t bear falling for a Mr Wrong again or again not having any dating success,  so prayed about this for months on and off.

Then early in 2008, at my sister’s hair salon, an advert for Heavenly Partners leaped out of the page of the magazine I was reading. I prayed about this with tears for days then the Lord gave me the verse in Romans 8:28. I contacted Heavenly Partners , and joined (not telling anyone except my sister).  I wrote several letters and the first person I met was someone local and friendly but there was no spark between us.

In early September I went on holiday with my elderly parents. My mother became ill at the end of the holiday, and few days later had to be rushed to hospital. It was during this terrible time that I got my first phone message from Wills. I must have sounded desperate in my reply message. Little did he know what was happening in my life at this time.   When he rang the second time it was only a few days after my mother had died.  We had no contact then until I had returned to work and applied for a day course for work in London in early December. I wrote to Wills again and so started our courtship which ended in us getting engaged in August 2011 and married in July 2012.   It wasn’t all plain sailing, and we still lean on the Lord for financial and employment issues. It wasn’t easy having a long distance relationship and only being able to see each other every two or three weeks. But we managed it!” 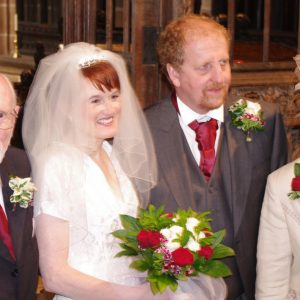 Wills ends the story
“I proposed to Carolyn on bended-knee in August 2011, in the Sistine Chapel in Rome, under Michael Angelo’s frescoes.  After that we were kept very busy organising and planning our wedding.  This was quite stressful at times, but fun.  On the actual day, we had torrential rain of Biblical proportions, which only added to the atmosphere. It was a very beautiful momentous wedding service. Carolyn looked absolutely stunning and beautiful in her mother’s vintage wedding dress from 1956, modified for the occasion.  We exchanged our vows loudly and clearly, so that everybody could hear.  Then we all went to Formby Guild hall, where we had our wedding reception, with a lovely and delicious wedding breakfast.  The timings during the day ran over by about an hour, as everyone was enjoying themselves so much!  Our first wedding dance was Unforgettable, by Nat King Cole.  Then our wedding singer, Cathy Glen-England, sang at our request Summertime by Gershwin.

“Indeed I was very pleased to receive the profiles you sent me. Thank you also for your letter and the template for guidance, taken together with the previous generally more […]

‘I think where a service such as this is concerned, the personal touch is important. I have felt that a personal interest was being shown, any request was acted on […]

“I really appreciate the personal contact from you and the fact that you ring me. That’s really good.”

All contact with your office has been good. You are kind and helpful on the telephone and it is like talking to friends! Concerning the profiles, they do generally give […]