We only intended to be friends!

The Story of John and Irene

In March 1998 my world was completely shattered – my husband announced 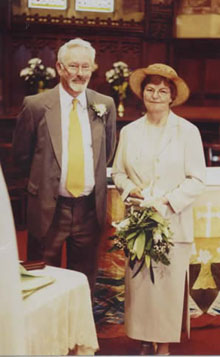 that our marriage of 28 years was over. I was devastated. I was married to a vicar and had worked alongside him throughout his ministry. When we parted, I left behind my home, my church, my friends and my job. I had to cope with four bereavements. Eventually I ended up in Northfield (in Birmingham). Cutting a long story short, in due course and after much prayer I contacted friendsfirst. On receipt of the friendsfirstinformation I realised that I wasn’t ready to take matters furthers. I put the paperwork in my desk, though I have no idea why I did not throw it away. After four more years I did feel ready and contacted friendsfirst again. I joined, and received profiles. When I saw ‘John of Bromsgrove’ it appealed to me. He sounded interesting, and Bromsgrove was not too far from where I lived. I certainly did not want a husband, but a companion with whom I could go out to a meal, the theatre, concerts, or whatever we chose. John and I corresponded via the friendsfirst box numbers, then telephoned and ultimately we met. Our friendship grew very quickly, John falling in love with me much sooner than I did with him. (I was fighting falling in love because I felt I could never trust a man again). However, after much prayer I did fall in love with John. We got engaged, and married on March 20th, 2004.

The death of my wife Rita in October 2002 hit me hard. I was a widower for the second time, and not yet sixty years of age. Though initially too frightened to wish to risk further loss and heartache, I later realised that living on my own for the rest of my life was a lonely and appaulling prospect. I started praying for the lady who one day, whoever and wherever she was, might become my wife. Further, if such lady existed that she would be blessed.

Soon after this I received a call from a Methodist Minister friend. She has received, addressed to a non-existent Methodist Church in her vicinity, correspondence she had consigned to the waste bin. Thinking of me, she had retrieved it, and would send it to me. She did. It was friendsfirst publicity. I obtained some more information from friendsfirst and eventually (after badgering from my daughters) joined and filledin the forms.

A profile was prepared and agreed, and duly issued to the ladies. I received several nice letters, some of whose writers’ profiles I had seen, some not. I replied to all, including ‘Irene of Northfield’. I had not seen her profile, and in a later letter had to ask her to ‘reveal herself’ as she was ‘a lady of mystery’.

On our first meeting we went for coffee and a chat at the gym where John was a member. Irene had (for her own safety – who was was this John anyway?) a strategy requiring her to get home by a certain time. We enjoyed each other’s company, our second meeting was a the Botanic Gardens in Edgbaston (Birmingham). We were both surprised to find ourselves holding hands, and (it being the hottest day in July 2003) found a seat in the shade of a tree and sat down. We both talked, openly, honestly and freely (warts and all, as they say) about ourselves. After this we met regularly and spent as much time as we could together at one or other of our homes. (We were only nine miles and twenty four sets of traffic lights apart, so this was easy).

By the Autumn we knew we would like to marry, but in mid-November Irene had a knee-joint replacement operation. On her return home John moved into her spare bedroom and looked after her. However, she left hospital with a virus with made her ill and bad-tempered. This very nearly split us up, but we came through it and got engaged early in December – to the delight of Irene’s two daughters and John’s three.

We married at St. Stephen’s Church, Selly Park, Birmingham on 20th March 2004. Three clergy shared the ceremony, Irene’s vicar (Nigel) ‘did the legal bit’, John’s Methodist Minister (Ieuan) was Best Man and led the prayers, while Irene’s brother John (a Free Evangelical Minister) gave the sermon. A joyous time indeed. We honeymooned in Venice where we heard an enthusiastic local orchestra play music by Vivaldi in one of the ancient churches.

Irene moved into John’s house in Bromsgrove. Both houses were fully furnished; disagreements arose over which furniture to keep, which to dispose of. In every case compromised was reached and carried out, and Irene’s house later sold.

We have been married approaching a year, and could hardly be happier. Our five daughters are delighted. We praise and thank God for what has happened over the last eighteen months, are satisfied it is His doing. And we also say ‘Thank you’ to Katharine Gray andfriendsfirst.

“All contact with your office has been good. You are kind and helpful on the telephone and it is like talking to friends!”

“Thank you for your service. Your contact with me has been good, and I have been pleased to be able to talk about the way you work. Your staff have […]

“I was very impressed with the pack and it was very helpful.”

“Your service has been good – please find enclosed my renewal fee.”