A Life changing experience – when the Lord decided it was time

The Story of Hayley and Chris

Hayley was very involved with young people at her church, but all the people 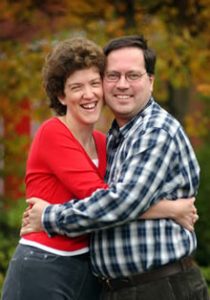 of her age were married already. So although she had a wide circle of friends, she looked in vain for the really close relationship which would lead to marriage. Bubbly Hayley had no lack of admirers. Her life was full, and in her role as a coach tour operator she met a lot of people who took a shine to her. However, most of the clients were in their 50s and 60s, and didn’t really match up to what a girl of 34 was looking for.

Sadly, neither did any of the people she met through her disastrous first experiences with regular agencies. The meetings they arranged were mismatches, with men who were quite different from her. Even the operatic society she attended was filled mainly by women. She said: “I’ve never been one for going to pubs and getting drunk; going to the cinema is more my style.” She realised she wasn’t getting anywhere under her own steam and turned to friends first – and was engaged to music teacher Chris Smith within four months of meeting him!

“He fitted the bill nicely,” she recalled, and demonstrating her sense of humour: “But I had to meet a lot of frogs before finding my Prince!” “I knew what I was looking for; I have a good sense of humour, and needed someone who shared that humour and interest in life. Some I had met got intense, and scared me.

“But Chris wasn’t like that: he had other interests, and did not come across as desperate.” Chris had been the one she picked out of ten names and descriptions of men that friends first sent. When she rang the 36-year-old musician, he was late for band practice, and sounded nervous.

It did not matter. When Hayley, of Brierley Hill, near Dudley, and Chris met up at the Black Horse pub in Halesowen, the doubts were dispelled. They hit it off straight away, and friendship deepened. Though they started cautiously, only meeting once or twice a week, they liked one another so much, within a month they had fallen in love.

They were married during August 2002 at Bank Street Methodist Church, Brierley Hill, where Hayley had always attended. The congregation there had all met Chris, and 200 of them packed the church to make it a wonderful wedding day. They are happier now, and more confident. Hayley said: “This even shows when I meet someone my own age now. Meeting Chris was a life-changing experience: the Lord thought it was my time.”

Their car was written off in a crash a year later – but they were able to walk away from the wreck, though Chris had chunks of glass embedded in his head, and was in such pain that he hardly slept for a week.

Surviving the frightening experience has brought them even closer. Chris said: “It makes you think about what’s important in life. He said: “With my musical background, like Hayley, I met a lot of people the same age – but you tend to move in close circles in music. I was meeting the same people, and most were married.

“You tend not to look to get involved with people you are seeing anyway on a regular basis. A music teacher tends to work strange hours, which means you tend not to get out and socialise a great deal. “You’re so busy, it leaves little time for meeting people.”

“friends first has worked very well for us. Life suddenly changes, just when you are not expecting it.”

“Thank you for your service – its been a very good experience, which has really improved my confidence.”

“I think you offer a wonderful service and I have really enjoyed the experience – so nice to have a personal call.”

I am in receipt of copy of my profile , thanks. There is only one small amendment to make then it will be good and okay. You guys are doing […]