The Story of David and Pat 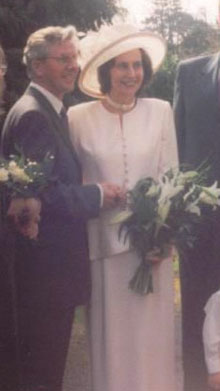 the rest of my life being single. However, after almost 14 years without a husband, and some disappointing relationships, I was getting accustomed to the single life and I was feeling quite good about the fact that I had been able to come through such a major trauma successfully, with a stronger Christian faith. God had provided for and guided my 2 grown-up children and me in miraculous ways. Life was really tough at times, but I had a sense of achievement: I had a home, a job, a church, and a wonderful family.

A single colleague introduced me to the idea of a Christian ‘dating agency’, but I wasn’t ready for it. Sometime later my married son gave me a leaflet about friendsfirst, which he had picked up at church, but it took me about a year to decide ‘to give it a go’.

I wasn’t inundated with letters and phonecalls after I joined friendsfirst and I had decided that I had made myself sound rather uninteresting in the profile I had written. This would have to be rectified. In the meantime I contacted 2 people whose profiles interested me. David’s initial reply was that he was already seeing someone, but it wasn’t a committed relationship and we could email each other. I had started seeing the other person I contacted, but I didn’t see a future for that friendship.

It was shortly before the Millennium that I got an email from David, the kind of email that made me think his romance wasn’t going too well. So we arranged a meeting at which we found we had quite a lot in common. We decided it was worth pursuing this friendship and David started visiting fortnightly (he lived miles away from me). Between visits we emailed each other most days and had a long phone call about once a week. Could it be that romance was in the air?

Very early in our friendship David told me he had to have major surgery so that cast a shadow on the future. However, the surgery was successful and David soon bounced back to health. David’s children and mine had long since flown the nest, so we were both free agents. We started to talk hypothetically about what we would do if we married: where we would live, what church would we go to – a difficult question as we were from quite different backgrounds.

In August 2001 we had a holiday with some relatives of David’s and soon after that he proposed, on bended knee holding a bunch of red roses!! Amazingly, I wasn’t ready to give him a yes or no answer straightaway. Decision-making is not my strong point. Independence had become rather ingrained and I knew it wasn’t going to be easy to let go. I didn’t keep him waiting long though, we got engaged soon afterwards and we were married in March 2002. It was a magnificent day; the weather was beautiful, the March winds took a day off and the sun shone. Family and friends joined us for a lovely Church service followed by a delicious meal and we knew God was with us too.

There’s been a lot to learn since then. I had been single almost 15 years and David about half that time, so we were a bit set in our ways!! I had to have major surgery last year and David certainly proved his worth during those difficult months. We rejoice in God’s goodness. ‘Becoming’ single late in life is devastating. Making the decision to join friendsfirst took a long time – I wonder why?

David’s side of the story…

While driving from Cambridge to Birmingham for the first meeting with Pat, I was listening to “Classic FM”. The music being played was ‘Finlandia’ by Sibelius and the words of the hymn ‘Be still my soul’ came to my mind. In particular I felt these lines were meant for me, “Leave to thy God, to order and provide, In every change, He faithful will remain”.

In fact, this music must be a favourite of many listeners to “Classic FM” as I had heard it on a similar occasion when I was going to meet another lady, but that contact did not work out. So was I right to think that I could trust God “to order and provide” on this occasion.

We had arranged to meet at a ‘Harvester’ restaurant close to Junction 7 on the M6 motorway. We had a nice meal together and then drove to Barr Beacon to see the view and chat. It was early in the year, so it was necessary to run the engine to get some warmth out of the heater. But it was also a good excuse for me to hold Pat’s hand.

We decided to meet again and so began a fortnightly journey for me from Cambridge to Birmingham. I became a regular customer at the ‘Express by Holiday Inn’ on the Saturday nights, and we visited a number of churches in the area to try and find one that appealed to both of us.

My cousin lives in the Warwickshire village of Lower Tysoe and she was willing to accommodate us for a week’s holiday. The days went all to quickly as we enjoyed each other’s company. One day-trip was to Warwick Castle, and being near Stratford-on-Avon, we had to go to the Royal Shakespeare Theatre to see “Twelfth Night”.

It was not long after that holiday that visiting Pat with a bunch of red roses, and on bended knee, I proposed marriage. Pat said she would like to think about it, but a fortnight later she said, “Yes”.

We agreed to set up home in Sutton Coldfield, being not far from Pat’s son (and more importantly, Pat’s grandchildren), and to have the wedding ceremony in my home church. It was a very happy occasion in which my son was my ‘Best Man’ and Pat’s son ‘gave her away’. At the Reception, I was able to tell the guests that only the previous day I had exchanged contracts on the sale of my house and that completion would be on the Monday a week later. We honeymooned in Malta and then lived in Pat’s house until our new house was ready in Sutton Coldfield.

We have been working our way through the adjustments that obviously have to be made and have continued to do so. Although we are both retired, we are actively involved in an embryonic Christian Church on the housing estate.

“Dear Katharine, Thank you for revising my profile, it’s as I want it now!  It was good to have a conversation last night. You are very encouraging, for what is […]

“Dear Katharine,  Thank you for the revised profile.  I was amazed at the detail that you recorded!  I think you have made a good job of it.”

“Thanks for your continuing efforts in encouraging active, caring membership and friendship.”