You are never too old for love!

The Story of Bill and Lois 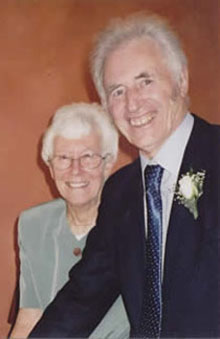 times I wished it actually would. I was devastated. The 1st year was just grief and numbness. The 2nd emptiness and the feeling ‘ Is this my life from now on ?’. I belonged to a church, was a member of the choir and had friends, one in particular I used to go out with one day a week. My two daughters were wonderful and very supportive but they live in London and Scotland. In early 2002 I saw the advertisement for friendsfirst in Saga Magazine and sent off, half – heartedly for details. I duly registered and in April and June got my first two lots of profiles which I threw in the bin with the thought ‘ why am I doing this?’.  In August my profiles arrived and Bill’s profile was on it. For some reason I phoned him and we agreed to meet. After our 1st meeting, a lunch lasting from 12 noon until 7.30, things moved very quickly.  I came to Biggleswade to meet Bill’s son and daughter and all went well. When we told our families we were going to get married they were delighted. We got married on 15th March 2003 and soon it will be our 2nd anniversary.   Now I have a future with Bill and a granddaughter (Bill’s) aged 3 named Charlotte to watch grow up. She is a treasure.

When my wife died early in 2002 after 41 years of marriage I was on my own for the first time in my life.It was awful – the evenings being the worst when my family ,who live nearby had gone home.I enrolled in friendsfirst and the August profiles were my first. I might not have rung Lois as I would have had to travel round the dreaded M25 to get to Basingstoke where she lived. Luckily she phoned me and from the 1st moment we met at Basingstoke Railway Station it was right.I am not the most spontaneous person but to my surprise I found myself giving her a huge hug.From then on things moved very quickly. 2 weeks after we met she went to Scotland for two weeks to stay with her daughter. Any doubts we had disappeared during that time and we talked on the phone every day. Both our families were ‘ tickled pink ‘ at the idea of romance at 70 for their ‘aged ‘ parents. We are very happy and feel very blessed in our life together.

Advice from both of us for anybody hesitating about taking such a step:- GO FOR IT !!!!! You have nothing to lose and maybe a whole new life to gain.

Thank you for doing such a great job – I’m so grateful that something like Heavenly Partners exists. I hope and trust that God is holding and keeping and blessing […]

“Your organisation has certainly been both reputable and successful for me. Thank you for your service. Please find enclosed a card thanking you. I am very happy with the service […]

“I have found it very easy to contact you. Having contact with you really personalises your service. Your service is very friendly and supportive and has given me confidence. I […]

“You’ve been superb-Thank you! Signing up to your orgainsation enabled me to get in the mood for dating and to be more confident – without that confidence boost I wouldn’t […]