Part 1 – After two disastrous meeting with two other gentlemen I was ready to give up. Then I decided to give it one more try. I phoned Bert in February and he was about to go on holiday then I went on holiday when he came back but we kept in touch by phone. Conversation was easy because we like the same things and I was thrilled when he said “lets meet up”. I so enjoy his company. I looked forward to every call and meeting and soon realised this was hopefully going somewhere and when he asked me to marry him there was no hesitation. In the words of my son who lives with me at present, when told we were engaged he said “flipping heck Mum, that’s quick” but he is delighted as are all of Bert’s large family. This weekend I hope to meet some of them as we look around Ashton Under Lyne for a flat for me while his house goes on the market. Mine is sold. Everything is moving very quickly which is quite scary but exciting at the same time. We have had so much support from friends as well. So my advice to newcomers would be “stick at it and pray and pray and pray”. The Lord wants to give good gifts to those who love him. We are both so happy that we persevered and found each other. It’s a dream come true and we look forward to spending the rest of our lives together. So thank you so much Friends 1st.P.S I will not need any more profiles, thank you, or further membership. Jobs done!

Part 2 – I was a client of New Day before they closed and you took over their members. You sent me a profile of Bert and we started to talk on the phone in March 2014. In April we met up for the first time and got on really well together. That same month Bert ask me to marry him and I said yes. We got engaged and I sold my bungalow in Morecambe and left my Church and friends to go and live in an apartment in Stalybridge, Cheshire, near to where Bert was born and lived in Ashton under Lyne. We arranged a wedding in about 6 weeks and got married at Bert’s New Life Church in Ashton on 12th July. It was a beautiful day and a lovely wedding. My son gave me away and Bert’s youngest son was his best man. Our families have supported us all the way. We then sold Bert’s house and started looking for our first home together. On 19th November we moved into a Bungalow in Dukinfield. It was the first one we viewed. When I moved into the apartment prior to marriage, it was the firs tone I looked at. God has been with us every setop of the way and we are very happy. If we hadn’t joined we probably would never have me. Ours is a truly wonderful story of God’s goodness to us. I would have said to any lonely person, go fro it, there is not need to be alone. There is someone waiting for you. I would also add that one of you may have to be prepared to maybe move house, area of make some sacrifice. Just like Peter when he saw Jesus walking on the water, said can I? and did, you can change your life if you ware willing to have faith in God. We hope this story will encourage someone. Thank you for introducing us to each other. With love in Christ.

Dear Katherine, As you know I joined friends first in April last year. I have several profiles sent to me but each of them were geographically too far away. I also heard from several ladies across the country but again so far away. My home is Greater Manchester, and I was getting calls from Berkshire, London, Scotland etc.

You may recall my comments to you on this matter as I was beginning to think, this is not working for me, perhaps its not to be. I was disappointed but I’ll just get on with my life as it is.

Then! this Lady (Anne) from Morecambe telephoned and this again was quite a distance. However I knew a little about Morecambe and surrounding area’s having had holidays there. After a chat, I said “Right, I’d love to have a day in Morecambe and I’ll come to see you”

We had a good day, lunch together. It was really very nice. We found quite quickly we had much in common and agreed to meet again. Before that happened I had an attack of doubt again, due to the distance. And so I missed that appointment, but in conversation later on, I apologised and we met again. On that occasion we both realized there was a growing attraction to each other. As time went on and we met more often our feelings for one another grew and we fell in love. 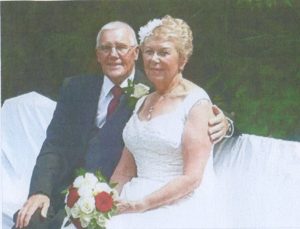 There came a point when we were sat gazing into each others eyes and I asked Ann to marry me. Without hesitation She said yes.

And so we pray that soon we can can get married soon and start a new life together. Our church leaders, friends and family have been really wonderful and encouraging. In the end distance became no barrier. The song often comes to mind: “No mountain too high, no river to wide to keep me away from you Babe”

So many thanks for all your kindness and help.  I shall certainly publicise your service to my many single friends. Wishing you and all the team at friendsfirst – A VERY […]

“What a lovely surprise to receive a birthday card from you kind folks!! Thank you so much for your thoughtfulness – I really appreciate it very much”

“Thank you so much for your lovely Christmas blessing.   May you both be blessed this Christmas in the work you both do, providing a  service much needed for commited Christians. […]

“I found the contact with your staff helpful – it made my membership more personal – I was not just a box number! I’ve found it very exciting to receive […]