A Marriage made in heaven for sure 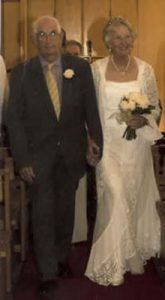 The Story of Jill and Allan

Marriages are made in heaven so goes the saying and so writes Allan. This is  their story as written by him.

Both Jill and Allan came together under the providence of God.

They did not know each other; one hundred miles separated them.

Jill was a single lady aged 70 years and Allan was 71 years old, who was a widower.

Jill came into Heavenly Partners because she read an article in the Christian press . Jill joined in November 2003.

For the first year 2004 there was no success, and 2005 was much the same. Jill decided to leave and not to renew her membership.

Allan joined in November 2005.  He too was not meeting up with success. Allan was going to shread all the material from Heavenly Partners but came upon a profile that said the friend I want must trust in the finished work of Christ. This statement arrested Allan.

Allan emailed Jill and the email came back as undelivered.

Allan then wrote a letter to Jill through Heavenly Partners , as he did not have Jill’s address.

They contacted each other to discover that Allan was a minister with the Fellowship of Independent Evangelical Churches in Methil, Fife and that he had retired from there after 32 years as the minister. Jill was the organist at a FIEC church in Longhorsley.  Jill came from Morpeth. 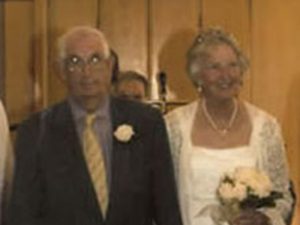 They decided to meet and they met half way at Berwick on Tweed on 16th January 2006.  This was a memorable day for them both to discover they had so much in common.   They were convinced that God was doing something for them that they could have never done for themselves, as they did not know each other.  They realised they were destined for each other, and they started to plan ahead.

On the 31st January 2006 Allan proposed to Jill and on the 20th February 2006 they were engaged.  Allan booked a Bed and Breakfast and started to go down to Morpeth on Mondays and back up to Methil on the Tuesday.  They then set the date for the wedding.  They married on the 9th September 2006 with all the families there from Jill and Allan’s side.

Now that they are married, God has been good to them. God gave to them a promise Jeremiah 29v11 For I know the thoughts that I think toward you, says the LORD thoughts of peace and not of evil to give you a future and a hope.  They are both very happy trusting in the promise that God gave to them.

“I am eternally grateful to your company for this unlooked for opportunity to start the ball rolling to find my soul mate.”

Thank you for all your encouragement, letters etc. The work you do brings so much new happiness to many, and I hope that continues for many years to come.

Thank you for your professionalism and understanding.

“Dear Patricia, Thanks so much for the call last night – I did appreciate it and all the work that you are doing on behalf of the your members. You […]