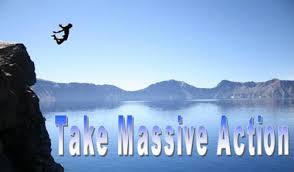 You can drift or you can take action. My mantra for you for 2014 is “Massive Action”.

You see, I’ve known for quite some time that the big difference between the people that get a lot out of Heavenly Partners and those that don’t is ‘massive action’. It basically comes down to how much effort they are putting in. Yes sometimes there’s a bit of luck but generally there is no luck without hard work and action.

Without a doubt, massive action is where it’s at and that is only possible if you have a clear focused goal in front of you that you don’t let go of, the determination to go get it and the perseverance to keep at it when the going gets tough.

I’m not talking consecutive massive action here either. Oh no. I’m talking simultaneous actions.  So, lots of things being done and happening, all at once. Because that’s the only way to ensure success.

So what does this massive action look like for a Heavenly Partners member then?  Well first of all it’s taking a good hard look at yourself and making any necessary changes so that you are the person other people are going to be attracted to. (If you haven’t read the book ‘How to Be the One I’d strongly recommend it’s on your reading list this month). It’s looking at yourself as a person – i.e. your character – and how you come across to people – the first impression they get about you whether that’s in person (ie how you dress and come across) or on the telephone or through correspondence.

Then it’s contacting pretty much everyone we’ve sent you and doing so in a way that is interesting, relevant to them and that elicits a response. And of course it includes responding to anyone who contacts you. It’s writing great letters and learning how to do so if you aren’t the world’s best letter writer (the same applies for emails); it’s having interesting conversation to make when you call someone.

At the same time it’s booking to come to our events – and not just ours – it’s getting yourself out and about meeting new people as much as possible. This might mean joining new clubs or groups, becoming a volunteer for something or getting involved in a new activity. And this will take some thought because if you’re looking to meet someone then you’ve got to join the right things. There’s not much point joining a shooting club if you want to meet women and all the members of the club are men. Yes it might be a fun thing to do but it probably won’t help you reach your goal.

If you’re serious about making 2014 the year when your personal life changes , then know for sure that you’re either going to be really lucky or, more likely, take massive action. Maybe you think you’re life is really busy already and there just isn’t room for any more activity. Well maybe that’s true – but if that’s the case you are going to have to evaluate whether the way you currently spend your time is helping you reach your goal or not – and if it isn’t then some things are going to have to change.

I love January.   I love the newness and freshness and clean start that permeates everywhere. People are more optimistic at the start of the year, but, you know, time whizzes by ever so fast. Before we know it we’ll be putting the clocks forward and the first quarter of the year will have gone. Didn’t you find that last year?

Determined, planned and through through committed massive action really is the key, my friends, and it’s down to you to take that action. To make things happen. To bring about change and to build your lives so the things you want become a reality not just a dream.

Remember if it’s to be, it really is up to me. And you, of course. Have a great year.